The nation's foremost EXPERT on the American Mafia

This Week In Gang Land 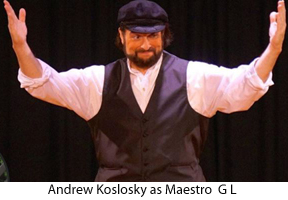 Andrew Koslosky, the renowned singer who became an FBI snitch and moved out of his Long Island home last year, is waiting in the wings to testify at trial against the Colombo crime family. But he's still in New York, and last month he took time out from his obligations to his Uncle Sam to recall his roots in the East New York section of Brooklyn on Facebook and pay homage to his mom during a telethon on the huge social media site, Gang Land has learned.

In a Christmas message after the telethon to raise money for the Josephine Foundation, a non-profit he founded to honor his mother in 2002, Koslosky recalled singing at Christmas concerts for 30 years and attending Midnight Mass after feasting on a "Seven Fishes" Christmas Eve dinner that included his "mom's fried cod fish" and "salmon cakes."

"I didn't appreciate what I had back then, but I certainly appreciate it now," Koslosky declared. He made no mention of his current station in life — he's a turncoat mob associate who has pleaded guilty to helping mobsters shake down the president of a Queens construction workers union, as well as other crimes, and hopes that he will be spared a prison term because he's agreed to testify against them.

He's charged with helping the Colombo crime family steal funds from a Queens labor union, but his bond allows him to meet in New York and work with officials of other unions as he awaits trial. But Joseph Bellantoni won't be able to meet those same officials next month at an annual labor-management conference that he's attended for nearly 20 years in Florida, where he'd planned a business-vacation trip with his wife.

The feds charged him with probably the most unlikely mob rubout to ever make its way into federal court — a 21-year-old cold case stabbing murder outside a Yonkers bar. But the 2018 case fell apart, and this week Genovese mobster John (Johnny T) Tortora was sentenced to four years behind bars because he decided to protect "a lifelong friend" from a likely return to prison.

Unless you get really lucky, and find a copy squirreled away in the wrong section of your local bookstore, you won't be able to get a first printing of Mob Boss: The Life Of Little Al D'Arco, The Man Who Brought Down The Mafia. But there are still some second print versions of the hardcover available as gifts or for your own reading pleasure.

Because of the heavy demand, Thomas Dunne Books went to the well again for a second printing of Mob Boss, the book that The New York Times called a "gripping, novelistic biography — a bulls-eye."

The mass market, paperback version was published in 2015. It is available online and at your favorite bookstores for about eight bucks. You still should be able to pick up a copy of the hard cover at your favorite bookstore, or, as Claude Raines might say to Humphrey Bogart, from any number of the usual online suspects: Amazon.com, Barnes & Noble and BooksAMillion, as well as an independent book seller near you.

Gang Land is a paid subscription site with no ads.